While the growing need for energy storage solutions has inspired research and development efforts on improving battery technologies, could a mechanical solution based on the ancient flywheel provide the answer?
News Image 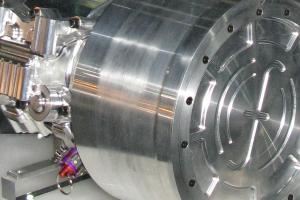 While the growing need for energy storage solutions has inspired research and development efforts on improving battery technologies, could a mechanical solution based on the ancient flywheel provide the answer?

Abigail Carson, an engineering undergraduate at the UK's Lancaster University, has created a superfast design for a Flywheel Energy Store (FES), which could be used for a wide range of energy storage applications, including storage of electricity generated by renewable sources such as wind turbines or solar panels.

The FES works by retaining energy kinetically in a levitated floating mass. The rotor, which can be made from composites such as carbon fibre, is permanently levitated, not electromagnetically elevated. This means it does not require additional control mechanisms, and does not need maintenance or user input.

According to Carson's simulations and calculations, the power rating of the Flywheel Energy Store can be changed, and has the potential to reach the MegaWatt range. While the initial aim was for the flywheel to rotate at 100,000 rpm, Carson's simulations show that the design can easily rotate at 144,000 rpm without any further adjustments. In comparison, most existing flywheel-based energy storage designs spin at around 60,000 rpm.

Caron says the FES can be used for a vast range of applications, helping provide energy security and independence, as well as eliminating waste in power networks, and allow cleaner cooking and heating in developing countries.

The current FES is around the size of a football, which is suited for domestic uses. However, the units are also stackable, so they can be scaled up to industrial applications by using many units together on the same network to provide a bigger energy store. Because such a scaled system would use individual units, even if one was affected, the rest of the system could keep running.

According to Carson, the FES offers several advantages over other energy storage devices, such as batteries.

“The lifespan of the FES is around 30 years, which is much longer than that for batteries,” she said. “Batteries cannot withstand power transfer pattern variations – they suffer very badly from charging and discharging abuse. This is not a problem for the FES, which is virtually immune to this sort of abuse."

“Batteries are unable to match the ramping rate (how quickly the energy can be charged or discharged) of a FES. This is important for when large amounts of energy are needed, such as smoothing out supply and demand on large energy networks.

Additionally, the FES has a design that allows it to be recycled.

Carson has a patent pending for the design and is currently seeking investment opportunities to implement the FES.