The UNSW mechatronics team from the School of Mechanical and Manufacturing Engineering is the only Australian team to qualify for the world's richest robotics competition.
News Image 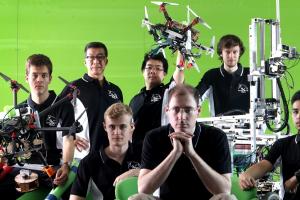 Five robots and ten engineers from the University of New South Wales will fly to the United Arab Emirates, representing Australia at the US$5 million Mohamed Bin Zayed International Robotics Competition.

The UNSW mechatronics team from the School of Mechanical and Manufacturing Engineering is the only Australian team to qualify for the world's richest robotics competition. They will do battle against 24 teams from 11 countries.

According to the engineers, the focus of the Mohamed Bin Zayed International Robotics Competition is disaster response, pushing forward the ability of robots to be deployed and act in a technologically demanding set of challenges.

The need for highly competent disaster response robots was highlighted during the Fukushima disaster, when a nuclear reactor went into meltdown. Initially, the robots deployed in the disaster were unable to do anything useful, including walking up a set of stairs, or unscrewing nuts and bolts.

"Our robot drones are going to be put to the test, identifying objects from the air, landing on moving vehicles to pick up those objects, then delivering them to a target site," said project leader Stanley Lam, a UNSW research associate and recent postgraduate student.

"There’s also a ground vehicle component, where the UGV has to drive to a panel in a location, identify and pick up a certain size spanner, grip it and use it to turn a valve stem – all of this without human intervention – to demonstrate dexterity and mobility of an autonomous mobile platform."

This is the first year for the Mohamed Bin Zayed International Robotics Competition. It will be held in Abu Dhabi from 16 to 18 March. The competition will be held every two years, offering US$5 million in prizes.

Of the 143 teams from 35 countries which entered the challenge, only 25 from 12 countries passed the qualifying trials. UNSW was the only successful team from Australia. Other teams to make the cut include the world’s elite universities and research centres: Carnegie Mellon University (USA), ETH Zurich (Switzerland), University of Tokyo and Imperial College London (UK). Teams from Spain, China, USA, UK, Switzerland, Japan, Korea, Germany, Italy, Denmark, Saudi Arabia and Poland will compete.