Macquarie University, Google and Ford have launched the 2017 FIRST Robotics Competition to inspire young minds to develop a passion for STEM.
News Image 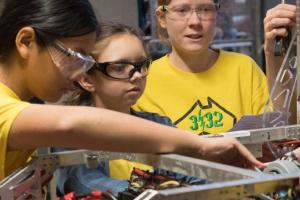 Inspiring young Australian and international minds to develop a passion for STEM, Macquarie University, Google and Ford have launched the 2017 FIRST Robotics Competition, to be held 13 to 18 March 2017 at the Sydney Olympic Park.

FIRST (For Inspiration and Recognition of Science and Technology) is a not-for-profit organisation that runs a suite of robotics programs for school students year round. The organisation aims to re-invigorate the teaching of science and technology with the excitement and atmosphere of a sporting or entertainment event, while educating students in hands-on building and programming skills, design innovation, as well as other factors to ongoing engineering, success, such as the ability to market their work, and to engage with a network of sponsors and mentors.

The FIRST Robotics Competition has innovation at its core, and 70 teams of students from schools around Australia and the Asia Pacific region have had an intense six weeks of preparation, with the help of mentors in engineering. They will showcase the robots they have designed and built from scratch at the event.

Director of First Australia, Luan Heimlich, said the event is all about stimulating young minds to become the problem solvers of the future.

"FIRST is all about cooperation and equipping students with skills for the future which they will hopefully carry with them for the rest of their lives," he said.

The event will allow the young participants to demonstrate their skills in science, technology, engineering and mathematics. They will compete for honours and recognition that reward design excellence, competitive play, sportsmanship, and high-impact partnerships between schools, businesses and communities.

This is the 23rd season for the FIRST Robotics Competition, and the 2017 challenge is centred around the theme of "STEAMWORKS", where students need to use their problem-solving skills to design a robot that is able to build steam pressure, install gears, and climb aboard an airship.

Sponsors Macquarie University, Google and Ford said they decided to support the event in order to combat falling interest in STEM by Australian youths. The event also gives students the opportunity to apply for more than $50 million in scholarships and student experiences from over 200 FIRST supporters to help further interests in science and technology.

Engineering Director at Google, Alan Noble, said the FIRST Robotics program continues to inspire students to become creators and inventors through extending their experiences of STEM in a practical way.

"We’re excited by the innovation and creativity we see in the students from the FIRST program," he said. "The technical skills they gain and confidence they develop in the program are equipping them for an exciting future. Who knows – we might have the next founder of a company like Google amongst these students."