Engineers are looking to leverage robotics technology in the aquaculture sector making it possible to regulate facilities from onshore.
News Image 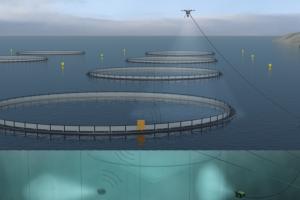 Engineers are looking to leverage robotics technology in the aquaculture sector, making it possible to regulate facilities from onshore.

Fish farms have to be monitored and maintained on a regular basis, including fish welfare monitoring, facility inspections, control of feed rationing and lice counting. These day-to-day tasks are currently being carried out by service vessels with several crew on board.

However, as the fish farming industry seeks to locate their farms in more open waters where weather and sea conditions are harsher, day-to-day tasks can become a lot more demanding. Anticipating these needs, European researchers from Scandinavian research organisation SINTEF and the Norwegian University of Science and Technology (NTNU) are working to assemble a team of robots that can do those jobs instead.

According to the researchers, there are many advantages to using autonomous and remotely operated systems.

"They require less resources, inspections can be carried out around the clock, and the safety of personnel ceases to be a problem", says Per Rundtop, a researcher at SINTEF Ocean.

The researchers are working with developers from companies such as Maritime Robotics, Argus Remote Systems and Lerow on the project called ARTIFEX, which involves vehicle design, autonomous systems, and airborne and underwater operations.

The goal is to get new technologies, such as autonomous vessels, drones and Remotely Operated Vehicles (ROVs), which can already carry out tasks such as inspections and underwater maintenance, to work well together.

Early 2018, the group plans to test the technology at SINTEF's full-scale laboratory on the island of Frøya. An autonomous vessel will transport an ROV and a drone out to the facility. Upon arrival, the vessel will act as a landing platform and base station for the drone, as well as the launch pad for the ROV. It will also perform tasks by interacting with the ROV.

An example of how these parts of the system will work together may include the drone monitoring the fish feeding process, while the ROV carries out underwater inspections and tasks such as repair of damage to the nets to ensure that holes do not become large enough to allow fish to escape.

With robotics technology, all of these operations can be monitored and operated by a single person located on shore.