The steel cables which tether rescuers to their helicopters can build up static electricity due to the dry air swirling around the helicopter.
News Image 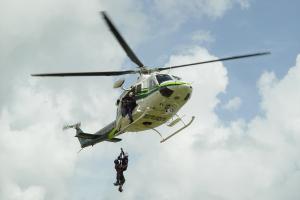 Engineering students and faculty from the Cornell Centre for Materials Research are working on helicopter rescue lines that do not subject rescuers to static shock.

While static shock is an annoyance for office workers, the build up of static electricity can have an impact on the lifesaving missions of helicopter rescuers.

The steel cables which tether rescuers to their helicopters can build up static electricity due to the dry air swirling around the helicopter. With the helicopter in the air, rescuers become the 'ground' and face the shock of this static discharge when they touch the ground or water, unless they can manipulate the end of the cable to hit the surface first.

The dryer the air, the more static is generated. In certain situations, the shock can be severe enough to knock out humans, and even in less serious cases, such a shock could lead to mistakes that costs lives, especially in the high-stakes situation of a helicopter rescue.

Commissioned by the US Navy, the engineers at Cornell University are working with a company called Advanced Design Consulting to solve the issue. They have developed new lines made from a liquid crystal polymer material called Vectran, and are now working out how to use the Vectran-based ropes in a helicopter-mounted winch system.

Vectran ropes are currently used in mountain climbing and sailing, and carry a tensile strength similar to Kevlar.

One of the challenges with the new material involves the winch system used to wind the cable onto a reel. In testing, the new rope is very strong, but has been found to burrow into the layers of rope underneath as it’s being reeled in, compromising the ability to unwind for later uses.

Thus, the engineers are creating a new “jacket,” or coating, which will prevent this burrowing behaviour, and also slightly re-engineering the winch drive. Another engineering consideration is the ease and versatility of the new winch drive design, which will need to be retrofitted to existing applications.