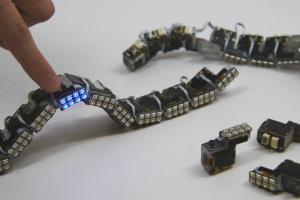 Researchers from the Tangible Media Group of the MIT Media Lab have released a paper on ChainFORM, a shapeshifting, modular actuated hardware system inspired by snake robots.

ChainFORM looks like a robotic snake, and comprises of identical modules that connect in a chain. Each module is equipped with rich input and output capability, including touch detection on multiple surfaces, angular detection, visual output via eight LEDs, and motor actuation, with a servo motor wrapped with a flexible circuit board, complete with an embedded microcontroller.

A master module, acting as the controller, sends inputs to each module on the chain, and also sends data back and forth to a computer through USB.

Each module can be detached to perform more functions. ChainFORM also works as a shape-changing interface, allowing the user to rearrange the shape or configuration of the system, and attach it to passive objects and bodies.

To demonstrate the capability and interactions possible with ChainFORM, the researchers implemented a variety of applications for both computer interfaces and hands-on prototyping tools.

According to the researchers, shape changing interfaces are an emerging field, and as the virtual world continues to interface with the real world, researchers are seeking actuation techniques that allow physical shapes to represent digital data, and allow spatial interactions via physical manipulation.

There is also a need for scalability, such that these interfaces can be small, for mobile use, while also transformable to allow larger interfaces as required.

It is this scalability that ChainFORM hopes to resolve. Being modular and connected in series, the system can be customised to different lengths, and with different device configurations. The form factor can also be modified, allowing transformation of both shape and scale.

One of the keys to the modularity of the system is the ability to add or remove links on the chain with little disruption or reprogramming needed. To do this, not only did the researchers make it physically simple to connect and disconnect the individual modules, but they also developed a communication architecture that is able to automatically determine how many modules there are and how they are connected. The custom network based on the I2C protocol also allows real-time I/O, even if there are many modules present.