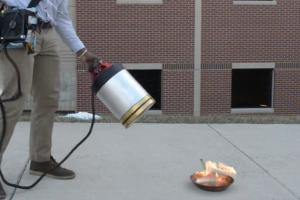 According to Robertson and Tran, the sonic fire extinguisher offers the cleanest and least destructive way to put out flames, because while fluids and chemicals are effective in putting out fires, they can also cause additional property damage and health risks. While the current version of the extinguisher is only capable of putting out small fires, the students have proven that it works.

While the US Defense Advanced Research Projects Agency (DARPA) has previously tested the idea of using sound waves to put out fires, Tran and Robertson are the first engineers to have turned the principle into a practical and useable device.

By focusing bass sound waves into a specific direction, Tran and Robertson maximised their ability to manipulate both oxygen and burning material. Because sound is a pressure wave that oscillates between regions of high and low pressure, the oscillation can be exploited to create a vacuum that separates air molecules from the sounds of the flame, putting out the fire.

As part of their research, the students tested a number of different frequencies. They found that high-pitched tones were ineffective on flames. Rather, low-frequency bass sounds between 30 and 60Hz were the most effective.

Tran and Robertson created their device, which consists of an audio amplifier, frequency generator, power supply unit, acoustic output, IR sensor and a cardboard collimator, complete with a vortex nozzle to focus the sound. The vortex ring in the collimator allows the sound waves to travel further, with little loss of energy. The IR sensor is capable of detecting a flame by using the wavelength of fire. The final prototype cost around US$600 to develop, and weighs 9 kg.

The two students will now work on further developing the device, so it can be used on larger fires. While the sonic fire extinguisher will initially be used on small fires such as grease fires on stovetops, Tran and Robertson says the technology could eventually be used to equip fleets of drones to combat fires.