Silicon has unique properties that allow it to store more than 1 MWh of energy in a single cubic metre which is ten times that of molten salts.
News Image 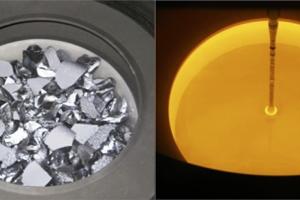 A team in Spain is developing an energy storage system based on molten silicon, where solar energy or surplus electricity is stored in the form of heat at around 1400°C.

Molten salt as energy storage is not a new invention: as renewable energy continues in its development, focus has also shifted to the storage and use of such dispersed and intermittent energy. In molten salt storage systems, the energy is used to heat a material to extremely high temperatures, then converted back to electricity upon demand through a thermal generator.

However, there are still problems with existing molten salt storage systems due to excessive costs, safety problems, or lack of material resources.

Silicon has unique properties that allow it to store more than 1 MWh of energy in a single cubic metre, which is ten times that of molten salts.

Molten silicon is thermally isolated from its environment until such energy is demanded, when this occurs, the heat stored is converted into electricity.

According to Alejandro Datas, the research promoter of the project said, silicon at high temperatures glows intensely, and thermophotovoltaic cells can be used to convert this incandescent radiation into electricity.

The final result is extremely compact system with no mobile parts, silent and able to store up to 10 times more of energy than existing solutions using abundant and inexpensive materials.

The first application of these devices is expected to be in solar thermal energy sector, thus avoiding the complex systems that use heat transfer fluids, valves and turbines to produce electricity. With a drastically simplified solution, the costs associated with energy generation will see a dramatic reduction. Along with the higher storage capacity of molten silicon, this system could be a profitable and viable alternative for renewable energy generation and storage.

The team of UPM researchers is now starting to manufacture the first lab-scale prototype, and have also started on the path to commercialisation via a new startup called SILSTORE.

[Image: Silicon before and after melting]