Skip to main content
Back to Home
Due to high volumes of users, there may be issues with accessing myPortal. Please reattempt to access your myPortal in 60 minutes. 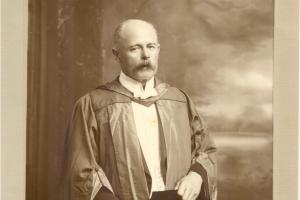 Having been classically educated in England and Ireland, and admitted in 1877 to the Institution of Civil Engineers, London, William Warren travelled half way around the world to create a legacy that exists to this day.

Warren migrated to Sydney in 1881, beginning work in the Roads and Bridges Branch of the Department of Public Works. Concurrently, he taught applied mechanics at Sydney Technical College in the evenings before being appointed lecturer in engineering in the Department of Physics at the University of Sydney in 1883 and professor from 1884.

Supported by famed academic W C Kernot in Melbourne, Warren worked to gain recognition for the place of engineering in universities. Popular, but not an outstanding lecturer, he required students to work from technical papers and textbooks, developing their abilities by personal guidance and example. At Sydney, he built up a great engineering school.

He had visited England and the United States of America in 1895 and also established a relationship with Sir Peter Russell, whose gifts to the university led to the foundation of the P N Russell School of Engineering, with facilities unmatched in Australia. In 1900, the first four-year engineering course was approved by the University, and later introduced a requirement of practical experience during their studies – a requirement still demanded by Engineers Australia today – and a decade later, courses in the three major branches of engineering were established in a form that remained essentially unchanged until the 1950s.

Warren was extensively published, especially in his areas of passion: primarily the virtues of Australian timbers, plus iron, steel, masonry, and concrete, all elements of his cutting-edge bridge designs. He served on Royal Commissions into railway bridges and Baldwin locomotives, and for the Adelaide and Melbourne exhibitions, and during World War One was associated with the manufacture of munitions, the calibration of testing machines and the certification of steel.

The acknowledged leader of his profession, with an international reputation and twice President of the Royal Society of NSW, Warren was in 1919 the unanimous choice as first president of the new Institution of Engineers, Australia. His retiring address the next year stressed restrictions on the use of the word ‘engineer’, registration of engineers with the institution as a qualifying body, a code of ethics and the engineer’s duty to his profession. Possessing clear insight, depth of knowledge, wide experience and mental ability, he had the gift of delegating work and authority.

Warren died in 1926 but his legacy lives on at the University of Sydney with the 1983 establishment of the Warren Centre, an independent institute affiliated withthe Engineering Faculty with the central objective of “fostering excellence and innovation in advanced engineering in all fields of Australian engineering”.