The coffee grounds from Melbourne’s cafés could be used to build five kilometres of road per year.
News Image 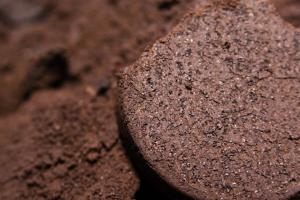 Engineers from the Swinburne University of Technology are using coffee grounds to create building materials for roads, reducing the amount of landfill and the demand for virgin quarry materials.

Professor Arul Arulrajah leads the geotechnical group in the Centre for Sustainable Infrastructure, and has been investigating the use of recycled materials for road construction in collaboration with Suranaree University of Technology, Thailand; Southeast University, Nanjing, China; and Shanghai Jiao Tong University, China.

Together with PhD candidate Teck-Ang Kua, he collected used coffee grounds from cafes surrounding the Swinburne University of Technology’s Hawthorn campus in Melbourne. They dried them in a 50°C oven for five days, then sieved the grounds to filter out lumps.

The researchers used the coffee ground as a base material, then mixed it with slag, which is a waste material from the blast furnaces used in steel production, as well as fly ash, which is produced by the combustion of coal in power plants.

While the combination of a highly organic waste like coffee grounds with industrial waste like slag and fly ash is counter-intuitive, the engineers found that they could create a sustainable subgrade construction material by carefully regulating the ratio of the materials to 70:30 base material-to-precursor .

They then added a mixture of sodium silicate solution (Na2SiO3) and sodium hydroxide solution (NaOH) as the alkaline liquid activator.

After experimenting with various mixtures and observing the particle bonding and geopolymer matrix patterns using a scanning electron microscope, the team found that when compressed into cylindrical blocks, all material combinations met the structural strength requirements to be a stabilised subgrade material, which is what sits under the road surface.

However, the strongest combination was a mixture with coffee grounds to slag ratio at 70:30, with no fly ash, combined with a 70:30 Na2SiO3 and NaOH solution in a 45:55 ratio, which yielded a relatively high unconfined compressive strength while requiring less liquid activator.

According to Professor Arulrajah, cafes on average dispose of about 150kg of coffee grounds per week.

“We estimate that the coffee grounds from Melbourne’s cafés could be used to build five kilometres of road per year. This would reduce landfill and the demand for virgin quarry materials,” he said.

Turning water and sunlight into fuel

Cup of coffee with a nugget on top?