Sydney and Melbourne the worst for traffic congestion

Austroads, the peak organisation of Australasian road transport and traffic agencies, has published a Congestion and Reliability Review which measures levels and identifies key causes of congestion across major cities in Australia and New Zealand.
News Image 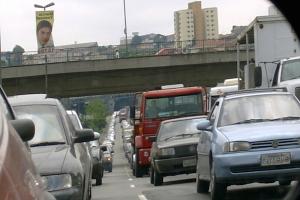 Austroads, the peak organisation of Australasian road transport and traffic agencies, has published a Congestion and Reliability Review which measures levels and identifies key causes of congestion across major cities in Australia and New Zealand.

Congestion performance is correlated with population, so the biggest cities, Sydney and Melbourne, perform worst overall. Road users there need to allow an average 50% more time than free flow to complete their journeys during peak hours, when average speeds can be as low as 29 km/h and 34 km/h respectively.

Perth (58 km/h) and Brisbane (52 km/h) have better performance, while Adelaide has the slowest average travel speed, but higher reliability, reflecting a road network with fewer motorways.

Darwin and Hobart have low levels of congestion, with Canberra the best performing city overall, achieving average speeds over 60 km/h.

The report notes that, while weekday morning and afternoon peaks exhibit time delays up to 40%, weekend travel also faces significant congestion with delays up to 30% at the mid-day peak in Sydney.

The findings are based on an analysis of Google Maps data for 600 km of roads for each major Australian city, enabling analysis of travel time along different road segments. The analysis was based on two months of data, comprising 1 km long road segments, with data points taken every 15 minutes, to calculate the six key congestion measures outlined in the report. An econometric analysis was then undertaken to provide insight into the drivers of network performance.

The causes of congestion are different in each city; most urban congestion (88-98%) is a consequence of recurrent causes (a routine imbalance of the number of road users and road capacity), while the remaining 2-12% is due to non-recurrent causes which include incidents, planned events and weather.

The study recommends that road and transport agencies invest in a portfolio of interventions including integrated land and transport planning, as well as relatively low cost, high benefit cost ratio interventions such as smart ramp metering and optimising traffic signals.