The thermal energy storage system (TESS) is built with silicon ceramics and steel and is based on CSIRO research.
News Image 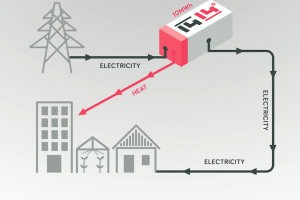 Intermittent energy supply has been an issue for the renewable energy sector. But a new product by 1414 Degrees is looking to solve that problem with a thermal energy storage system.

The device has been 10 years in the making and is based on research by CSIRO into storage methods for solar energy, with the prototype’s development co-funded by an accelerating commercialisation grant from AusIndustry.

The thermal energy storage system (TESS) is built with silicon ceramics and steel and is a solution in the intermediary scale storage market.

A prototype had its first successful run on September 30 last year. The results from the prototype support the concept for the commercial devices to be able store hundreds of MW of electricity, from renewable sources, could be supplied for $70,000 per MWh. Excess heat can also be used to heat water.

TESS compares to other products on the market by having minimal site-specific requirements, and it can be used in almost any location.

The system comprises 10 MWh and 200 MWh modules that can be connected to fill the range from 10 MWh to +2 GWh.

“What we do is take electricity from a source and we then heat a medium, which in our case is silicon, to 1414 degrees. Taking that to a very high temperature pushes it through a latent phase and allows us to store a significant amount of energy in that medium,” said Matthew Johnson, Chief Technical Officer at 1414 Degrees.

“The device is very well insulated, so it holds that heat for some time. Then we recover that heat by running it into a recovery device and cooling it down in a controlled manner through the energy recovery device.”

Johnson said the product can also be scaled.

“We can do a very large energy storage in the tens or even the hundreds of megawatt hours because we’re storing energy thermally, as opposed to chemically,” he said. “In terms of dollars per megawatt hour stored, it’s a fair bit more economical at scale.”

As the system can be placed near grid interconnector, there is no need for kilometres of high voltage lines, which reduces the cost of the system.

When it’s time to decommission the system, the solidified silicon waste that is produced can also be easily disposed of or recycled.

The key application for TESS is removing the intermittency from renewables.

For example, in situations in the grid where there is an abundance of power that can’t be used, the energy can be stored as heat and then returned to the grid or the user when a renewable isn’t available.

Industries such as food processing and production could particularly use the technology to access low-cost heat without emissions.

During the system’s development, the team needed to overcome challenges around the containment of the molten or semi-molten silicon.

There were also challenges associated with getting the heat out of the energy store and into the recovery device to allow the energy to be recovered.

The team also needed a solution that was durable enough to operate at the temperatures they required, but economical enough to ensure the industry would be interested in it.

“We did a lot of collaboration with the University of South Australia and we had a number of engineering students working on it,” Johnson said.

“We built a number of test units to validate the work we were doing, and we’ve actually built a demonstration unit – a smallish unit that holds roughly half a tonne of silicon that has enabled us to demonstrate that we can heat the silicon, hold the heat and then reclaim the energy to generate power.”

The company is also working with industries on what to do with the excess heat that can’t be turned into electricity.

“A starting point for us is likely to be the agricultural industry using our leftover heat. For example, heating glasshouses is a good application for us,” Johnson said.

“We’ve also looked at a number of district heating-type applications where we take in surplus electricity when it’s available and an economical price, and then return the heat to a district heating system and the electricity to the grid where it’s needed.”

The company is now finalising a commercial installation phase, which will most likely be in an agricultural application.

1414 Degrees is aiming to establish a renewable intermediate supply on the site, storing that energy and supplying the client with their power on a base load-type scenario.

“To do that, we’ve had to understand and model the power requirements, get to the stage where we understand the renewable and make sure the storage requirements match the performance of the energy storage and is consistent with what the user needs on-site,” Johnson said.

“We’ll work through all those issues. We believe we’re in a position to proceed with that now.”