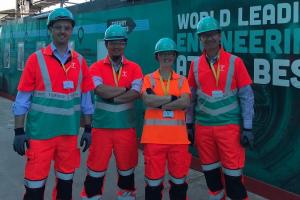 On the 29th August, four Engineers Australia members headed down to the Thames Tideway Kirtling Street site. Last June, we got to see the huge 32m diameter shaft just before the concrete base was poured. This year we were able to head down the east tunnel and see the Tunnel Boring Machine (TBM), Ursula, in action.

After descending about 60 metres via construction lift, we were lucky enough to hitch a ride on the workers’ train the 1.2km down to the back of the 100 metre long TBM. Stepping off the train we were greeted with the buzz of a mini manufacturing plant moving 5mm a minute, there was spoil coming continuously off the face travelling on a conveyor, while precast reinforced concrete segments were being manoeuvred from delivery into position ready to be fitted. We got to see the TBM driver and control room and were about 15 metres back from the action of the segments being fitted into place.

The TBMs are cutting an 8.8 metres diameter tunnel, with the internal diameter of the precast rings being 7.8 metres. The Kirtling Street site is access and drive shaft for the two drives of the new central tunnel section - one of three sections of tunnel to connect up with the final sewer already laid down to Beckton sewage treatment plant. The Thames Tideway sewer is due to be completed in 2023. It will eventually run a total of 25 kilometres, mainly under the Thames River. It is designed to alleviate the 150-year-old sewer system, which was built for a population less than half its current size. As a result, millions of tonnes of raw sewage spills untreated into the River Thames each year.

For more information about this engineering project see https://www.tideway.london/the-tunnel/the-engineering/.

A well spent couple of hours to our group of 4. Thanks to FLO for arranging the site visit.