With the USA currently the worst hit nation in the Covid-19 pandemic, the country's army engineers have been deployed to prepare facilities with hospital beds for those struck down with the deadly virus.
News Image 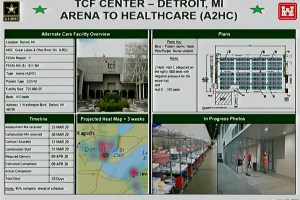 With the USA currently the worst hit nation in the Covid-19 pandemic, the country's army engineers have been deployed to prepare facilities with hospital beds for those struck down with the deadly virus.

At the request of governors and majors across multiple states and territories the Army Corps of Engineers are assessing and building structures for almost a thousand facilities, the Chief of Engineers and commanding general of the corps, Lt. Gen. Todd Semonite revealed.

The US Army has had to move rapidly despite being a large organisation dealing with multiple governments and stakeholders in the US, but have taken a can-do approach as engineers are known to do.

"The Corps of Engineers is pushing contractors hard to build quickly in hot spots. We don't have time to deal with red tape and bureaucracy," Semonite said.

"The Federal Emergency Management Agency and the Department of Health and Human Services are taking the lead on where construction will take place, and they've been providing modelling updates that forecast where the need will be the greatest and where the number of cases has peaked."

The US Department of Defense revealed the size of hospitals will vary based on need. If fewer beds are required then a hotel could be converted or if greater, a convention centre. Semonite said 914 assessment requests had been received, with 834 already completed. The Corps of Engineers have designed 17 facilities to be built by states while another 17 with 14,759 beds have already been built by the engineering corps.

An estimated 40 to 50 facilities might also need to be built by the Corps of Engineers in the coming months. Semonite said the Jacob K. Javits Convention Center in New York City designed and built by his engineers to house 2100 beds where the outbreak is the largest in the US, is almost complete.

Some of these hospitals are quite large, like McCormick Place in Chicago, that will have 3000 beds is 70% complete. Two university facilities in New York State and a convention centre in Detroit with more than a thousand beds each are also underway along with smaller facilities with between 100 and 600 beds across the country.