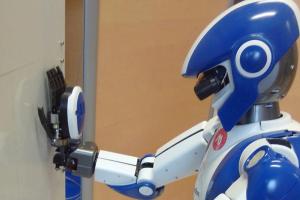 Airbus has teamed up with the Joint Robotics Laboratory, a French-Japanese collaboration, to embark on a four-year research project into whether humanoid robots can undertake manipulation tasks in the limited and confined environment of assembly lines, where they must make coordinated use of their bodies.

Due to the size of aircraft, the use of specialised fixed-base robots, like those already in use by the automotive industry, is largely impractical.

The Joint Robotics Laboratory has been working on new technologies called multi-contact locomotion, where a robot:uses its entire body to make contact with its environment, not just its feet. This type of robot can climb ladders and enter confined spaces. And multiple points of contact make it possible to increase the robot's stability, as well as the force it can apply when executing a task.

The cramped spaces that humans (and robots) need to work in necessitate particular postures. With the calculations for such postures proving to be mathematically complex, the researchers must firstly develop new algorithms that are much more powerful than existing ones, while keeping the calculations sufficiently fast in order for the movement of the robot to remain efficient.

Tasks being investigated for robots include: tightening a bolt, cleaning metallic dust from an area, or inserting parts in the structure of an airplane. They could also verify that systems are functioning properly once manufacturing is complete.

The algorithms being developed will be tested on a set of scenarios drawn from the needs of different branches of aviation including fixed wing aircraft, helicopters and spacecraft.

In addition to the contribution of new algorithms, this collaboration will look for the deficiencies of current robots, such as design, precision or power, with the goal of defining in the next 10 to 15 years, the specifications for the first generation of humanoid robots dedicated to the manufacture of large structures.