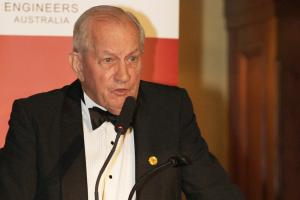 Tom was born on 28 April 1935 in Brisbane; The son of a builder father, and home duties mother he grew up in Windsor until heading overseas.

Brisbane Boys’ Grammar is where Tom grew his interest in engineering.  It was here that Tom also developed his passion for rugby, captaining the school team in his final year. Tom’s rugby prowess saw him playing at university before being selected to play for the Wallabies where he captained Australia in a match against the All Blacks in Auckland.

Tom earned his Bachelor’s Degree from the University of Queensland and it was there that his interest in the Institution of Engineers Australia began under the guidance of his professor, John Hardie Lavery. Tom would later return to become a board member of the UQ Faculty of Engineering in 1993.

Following his graduation, Tom applied for and won a Rhodes Scholarship to Oxford to study foundation engineering (which he later changed to Geology).  Arriving at Oxford, his reputation of having played for Australia resulted in him making the Oxford team and receiving Two Blues for the two years he played.  In his words: “it was great rugby, it’s the best rugby I’ve ever played.”

After finishing at Oxford, Tom went on to work in London in consulting for Scott & Wilson, a role that also took him to Jordan which lead to him developing an interest in archaeology.

After taking on a role in Tanzania, Tom decided to return home to Australia where he began his time with the Department of Harbours and Marine.

Tom served on the board of the Port of Brisbane from 1996 to 1999. He also spent time as a member of the road reform team within Queensland Transport.

After his original introduction to Engineers Australia as a student, Tom was asked later in his career to get more involved in committees. This led to Tom joining the Queensland Division Committee in 1989 and worked his way up as treasurer, to then become Queensland President in 1993.  He also was a National Councillor, Treasurer and Vice President for many years.

In 2012, Tom received an Order of Australia Medal in the General Division for his services to engineering through executive roles and to the community.

“It is with a heavy heart that we farewell Honorary Fellow and past Queensland President, Tom Baxter.

“For many years Tom chaired the annual Queensland Honorary Fellows luncheons, an occasion that was heralded by all attendees.

“His pride of establishing and working for Port of Brisbane Authority was always evident.  In particular, I will always recall the stories he shared of the importance of the port to the City of Brisbane.

“Our thoughts and condolences are with Tom’s family at this time.”

Tom leaves behind his wife Lyn, children Ian, Mark, Paul, Helen, Peter and Alex, and a host of grandchildren.