The prestigious John Connell gold medal was recently awarded to a Victorian engineer, recognising a significant contribution to the standing and prestige of the structural engineering profession.
News Image 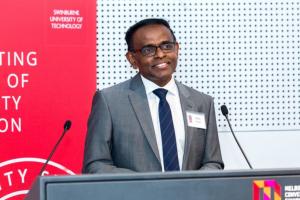 A Victorian engineer has been named the 2019 recipient of the prestigious John Connell gold medal in recognition of his significant contribution to the structural engineering profession.

Recipient Dr Shan Kumar is a senior structural and innovation engineer in Melbourne with over thirty years’ experience working building and infrastructure projects. His major involvement has been with high rise commercial, residential, sports venue and industrial projects in reinforced and prestressed concrete and steel structures.

Dr Kumar is a Professional Fellow at Swinburne University, a visiting lecturer and Honorary Fellow at University of Melbourne, and the current national counsellor and National President of the Concrete Institute of Australia.

The Swinburne University of Technology has awarded Dr Kumar with an honorary doctorate in engineering, and he was named one of Engineers Australia’s most innovative engineers in 2017 for his involvement with La Trobe tower.

For Dr Kumar, who describes engineering as his passion, the medal is a great honour.

“I love structural engineering - from designing tall buildings such as Eureka, to blending innovation with creative ideas put into practice to construct slim towers such as Collins House”, said Dr Kumar.

“Teaching and sharing these experiences with undergraduates and post-graduates has brought me enormous satisfaction.

“This medal is very close to my heart as I was privileged to know Dr John Connell and worked for John Connell Associates and later Connell Mott Macdonald, Connell Wagner and Aurecon for more than 24 years.”

“The Award has been named after Dr John Connell, Principal and Founder of the firm John Connell and Associates”, said Mr Statton.

“In recognition to his contribution, impact to and eminent standing within the structural engineering profession in Australia, it was with great pleasure on behalf of the Structures College Board to confirm Dr Shan Kumar as the winner of the 2019 John Connell Medal.”

One of the most influential engineers of his generation, John Connell made an outstanding contribution to the practice of structural engineering in Australia and to exporting Australian engineering skills to Asia in the 1970s and 1980s.