Francesca Maclean, 2017 Young ACT Woman of the Year, weighs in on what’s holding back participation in STEM subjects.
News Image 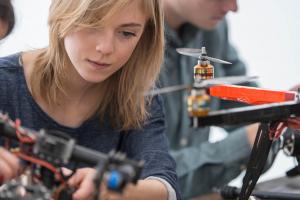 This article is in response to “STEM crisis threatens Australia’s business future’. I agree with the premise that Australia needs to fix our broken and leaky STEM pipeline, and that we need to increase selection of STEM subjects in secondary school, as well as female participation in STEM at all stages of the pipeline.

Then, at subsequent stages of the STEM pipeline biases are built into systems and processes, complemented by an exclusive culture that compromises the thriving participation of women and other minorities. This is a complex issue that is much bigger than students being afraid of failing.

Even if it is true, can we really blame young people for self-selecting out of STEM subjects in year 11 and year 12 because they are afraid of failing? Can you tell me where, in secondary education in Australia, we reward students for failing? Given that university admissions to STEM degrees are dependent on your ATAR (or, really – postcode) and assess your track record at 17, rather than your potential, are students really to blame?

With a third of year 12 students who applied for special provisions to the South Australian Certificate of Education Board were dealing with a psychological illness such as anxiety or depression in 2015, perhaps we should be slightly more hesitant to blame 15-18-year-old students not wanting to fail for our STEM crisis. They are merely surviving within the system in which they exist – one which we have helped create, and one that can have impacts on student wellbeing far beyond year 12.

The question we need to ask is, does the ATAR accurately reflect student potential, and the skills we need in STEM, and particularly engineering: critical analysis, problem solving, communication, reflective ability? If not, how can we change this system, or in fact, should we be creating a new one?

To the second issue: not only do we need to have more young people enrolling in STEM subjects in secondary school, but we need more women doing so. However, young women have a very different journey into and through STEM than their male counterparts.

Stereotypes that women and girls should be nice, helpful, and good at dealing with people, and that men and boys are strong, clever, and better at ‘tinkering’ perpetuate sex-segregation in high school.

Research has shown that a young woman’s perception of her STEM abilities under challenging circumstances affects her selection of physics, engineering, maths, computer science and other STEM subject majors. Rare exposure to successful women in STEM other than Marie Curie, combined with gendered stereotypes of STEM abilities (whether implicit or explicit) means that it is critical to ensure that young women have confidence in their own abilities, and that this confidence is not hijacked by implicit or explicit gender bias from their teachers, parents, or peers.

The shamefully low female participation in STEM subjects in secondary school is a complex issue and not just one of fearing failure, and one to which our industry should be paying more than lip service.

After secondary school, the women who continue to STEM degrees at university are often greeted with an environment that was, since its creation, not designed to include them.

If you are a male engineer, do you remember a time in which you were the only male in your maths or physics class? Do you remember having your achievements discounted because your lecturer felt sorry that you were the only boy in the class? Was it insinuated that you had an inappropriate relationship with your lecturer because they were the opposite sex and seemed to be nice to you? Were you relegated to perform the administration duties in your group projects because ‘boys are more organized than girls’? If you weren’t agreeing with someone’s opinion, were you called bossy, or aggressive, or emotional, or asked if you were on your period?

These experiences are most likely quite foreign if you are a male engineer, but are a daily reality for women in engineering at university, and these examples of subtle comments are indicative of a pervasive and sinister unconscious bias which continues within the STEM pipeline long after high school and university.

It is what we call ‘death by a thousand cuts’ for women in STEM – and after experiencing that day in, day out, why should they stay? But, more importantly, what we are doing to achieve meaningful change in creating more inclusive environments – other than saying we support diversity and inclusion?

I would love to hear from you and your company about the innovative ways in which you are creating a more diverse and inclusive engineering environment – and how you are ensuring you have an impact at every other stage of the pipeline.