Who's a clever buoy? Shark-spotting technology

The NSW Government is collaborating with UTS researchers to roll out and trial the capabilities of a shark-spotting sonar technology.
News Image 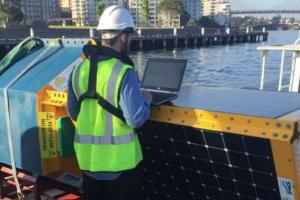 The NSW Government is collaborating with UTS researchers to roll out and trial the capabilities of a shark-spotting sonar technology.

The sonar system, called Clever Buoys, are developed by Shark Mitigation Systems. They use sonar to detect the distinctive movement patterns made by sharks, and transmit a signal to alert lifeguards, who can raise the alarm warning beachgoers and swimmers.

The technology is being tested as part of the NSW Government's Shark Management Strategy, a $16 million scientifically-driven program combining the use of advanced shark mitigation tehniques.

The Clever Buoy technology will be used together with aerial surveillance, drone surveillance, shark tagging and mobile apps, in a bit to reduce the incidence of shark bites on the NSW coast.

The test the Clever Buoy, the trial will situate the system about 1km offshore, in about 10m of water. Positioned nearby will be an array of underwater stereo video camera, that will record for up to five hours each day. The captured images will be compared to the information received from the Clever Buoy to visually verify sharks that the sonar system has detected.

The Clever Buoy will also be fitted with a VR2 receiver, which will record information about any sharks nearby which have previously been tagged.

According to marine biologist and head of the UTS School of Life Sciences, Professor Bill Gladstone, this is an opportunity to rigorously and independently test the capabilities of the Clever Buoy system to detect sharks under real-world conditions.

The results from the test will enable the government to determine whether to, and how to deploy sonar systems in any given environment, in order to provide the best available protection.

"We know from our previous research using aerial surveys that the Hawks Nest area is a nursery for juvenile white sharks. This presents us with a perfect opportunity to test the performance of the Clever Buoy in detecting white sharks, as well as the other species of sharks that occur there"” Professor Gladstone said.