Why engineers must step up as thought leaders

Chief Scientist Dr Alan Finkel encourages engineers, and those who train and mentor them, to raise the aspiration for the contribution they can make to public life in Australia.
News Image 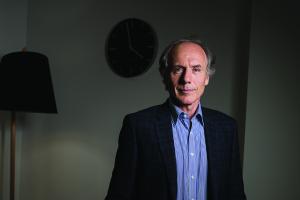 Chief Scientist Dr Alan Finkel encourages engineers, and those who train and mentor them, to raise the aspiration for the contribution they can make to public life in Australia.

The first engineer whose name is known to history is said to be Imhotep, who oversaw the construction of the Step Pyramid in the Ancient Egyptian city of Memphis. At the time, it was the largest building ever constructed, at more than 60 m high; complete with temples, living quarters, courtyards and 13 false doors. It remains the world’s oldest known monument of hewn stone: a 4500 year-old testament to inspired engineering.

So great was Imhotep’s creation that he was worshipped as a god for the next 3200 years.

We could say that the engineering profession doesn’t stand on a pedestal quite that high today. As the old joke goes, “every technological success is a great scientific achievement, and every technological disaster is an engineering failure”. It is very easy to take the people who put the planes in the sky and the electricity in the grid for granted.

And yet I would be very surprised if Imhotep wouldn’t trade his pedestal for the power he might enjoy today, if he could have his time again.

Go to any bookshop, and the business shelves are flooded with bestsellers promising to teach the secrets of the engineering way. Listen to a politician, and you hear the echoes of engineering jargon. It’s no coincidence that the powerbrokers of the world want in!

So many of the Pharaohs of the third millennium are engineers: from Jeff Bezos at the helm of Amazon, to Sundar Pichai at the helm of Google, to Xi Jinping, President of China. So much of their success, in turn, comes down to the ingenuity of their crack teams of engineers – teams with global impact out of all proportion to their size.

Engineering is the way hard things get done and the assurance that we’ll do them even better tomorrow. It’s the ancient discipline on the ascendant in the modern world.

As an engineer come neuroscientist come Chief Scientist, I know that I don’t have to persuade engineers to take an interest in public policy problems. It’s not in an engineer’s nature to sit in a traffic jam and not emerge with a prototype urban congestion plan. I do want to encourage engineers, and those who train and mentor them, to raise the aspiration for the contribution we can make to public life in Australia.

In my vision for 2025, the Master of Engineering is the equal of the MBA, if not the premier qualification that head-hunters for corporate boards want to see. Engineering concepts are applied with the same fluency in Parliament and the media as economic jargon is today – and the terms aren’t just co-opted, but understood. And engineers are encouraged and supported to step up as thought leaders in business and government alike: knowing how to make their knowledge useful at the tables where decisions are made.

Aspiration shouldn’t be confused with arrogance. To be effective, a leader needs to grapple with the messiness of human affairs and build confidence in unconventional solutions. It can’t be done by pure engineering logic, but it can be done by perceptive engineers.

After all, we’re Imhotep’s descendants. We’ve got monuments of our own to leave behind.

To learn more, secure your spot at the Australian Engineering Conference where Australia's Chief Scientist Dr Alan Finkel will deliver a keynote address.