Women in engineering ramp up speed

Almost 30 engineering student teams, several led by women, have converged on Winton Motor Raceway to put their Formula-style project cars to the test, including the University of Wollongong's team whose numbers were dominated by women.
News Image 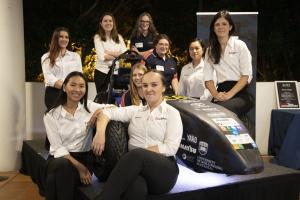 Almost 30 engineering student teams, several led by women, have converged on Winton Motor Raceway to put their Formula-style project cars to the test, including the University of Wollongong's team whose numbers were dominated by women.

Engineering students are required to design, build and compete in a Formula-style open wheeled racing car as part of a 12-month curriculum for the Formula SAE-Australasia (SAE-A) competition held in Victoria, which is run by the Society of Automotive Engineers Australasia. The 29 teams that competed in early December came from universities in New Zealand, India and Japan to go head-to-head with the many Australian teams vying for first, second and third place in relation to internal combustion and electric vehicles.

Sabrina Emanouel from the University of Technology, Sydney's Motorsports Electric team likened her role as team leader to that of team principal in an F1 team and credited her team with giving her the confidence to step into the industry once she graduates, Sabrina told Speedcafe.com.

"Every day you're in the workshop you're learning the skills that you need to actually be an engineer out in the field," she explained. "Being able to apply everything I've learned in class to the car and to a real-life scenario is obviously going to help me out in the industry."

Paige Cuthbert, who is studying engineering in New Zealand, said the experience she gained on the team would help her stand out as a graduate engineer, leader and operational manager. Both Paige and Sabrina said in their experience, working in automotive engineering was less about whether a man or woman was leading an engineering team and more about showing up and getting the job done.

SAE-A board member, Kate Cousins, who has worked for Holden throughout her career, said the competition gives students the teamwork and problem-solving skills that university courses may not be able to achieve on their own. The teams, results and video of the Formula SAE-A 2019 can be viewed here.

Image: Female engineering students from the University of Wollongong involved in Formula SAE-A.