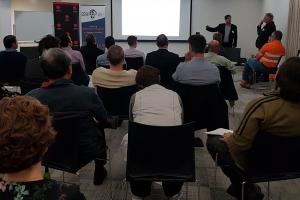 “Well”, I thought to myself, “what the heck is a world café, anyway?” All I knew was that EA had one coming up and a colleague suggested that I should go. The promotional material promised “a flexible and collaborative way to host a large group dialogue and develop insights and outcomes.” Sounded fascinating.

So, on the appointed evening I made my way to the Centre for Entrepreneurial Research and Innovation (CERI) in Nedlands and joined the gathering crowd. We had a little bit of time to network upon arrival, and I met a number of new people and caught up with few familiar faces.

Eventually we were called to order by our facilitator Doug Aberle, before being given a welcome to the centre by the CEO, Dr. Carolyn Williams.

Doug then outlined how the remains of evening would proceed. The process he outlined had two key differences from conventional workshops I have been involved in. Firstly, all the participants would rotate through the room, (so instead of one table number I had four), at intervals of about 15 minutes. And, at each rotation, we had to address a new question, a question which was to be built on top of the earlier dialogues. Oh, and the whole thing was done standing up. And quickly.

It’s worth then looking at the five questions:

In essence this lead to discussion on how leadership

Looking back on this process the things that struck me and have stuck with me are these:

The level of energy. Shortness. Insufficient time to get bogged down.

Cross pollination. The clash of ideas; the dialogues of different groups having developed along differing themes, themes which then clashed against each other as the groups were split up and then reconstituted.

Momentum. Being forced to change topics, in a structured way, meant that the discourse progressed from point to point, hopefully getting to a useful output.

The challenge for this form of idea development is avoid prejudicing the outcome.  The four questions above presume that leadership and environment could remove barriers.  In this case, I believe a fairly safe bet, given our current beliefs about organizational behaviour.

Anyway, where from here?

This was the first of three questions which I heard asked as the event wound down.  Along with: will anyone remember all of this? And: so, how much of this is new?

These are valid questions, which need to be addressed by any organization (or group) planning to use this technique.

To the last question first: the key value is that the activity was within a context (engineering) and also exposed different experiences within that context.  Even if all the participants were “experts” in the topic, the activity tailors that expertise to the problem at hand and should help avoid a one-size-fits-all solution.

We did partially capture outcomes as key phrases and will utilise these, however some focused follow up, either via analysis of transcripts or participant interviews might prove highly effective.  As of today, we are planning what the next step will be.   As they say, stay tuned.