Territory Generation’s Alice Springs Energy Storage Project will deliver what has been described as a game-changer for renewable energy in the Territory.
News Image 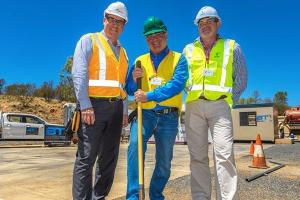 This occasion was marked by Minister for Essential Services Hon Gerry McCarthy and Territory Generation CEO Tim Duignan turning the first sod on the for the project, which is expected to be operational by the end of January 2018.

Vector Energy CEO Simon Mackenzie – representing the company who is installing the technology – was also on hand for the sod-turn.

“This represents one of the game-changers in the transition to renewable energy for Alice Springs,” Territory Generation CEO Tim Duignan said.

“The system itself is similar to the South Australian battery solution – albeit smaller – and the SA project has the whole world talking.”

“The reality is that even though our solution is much smaller, it represents a greater percentage of the grid – ours is 10 per cent of the total load compared to about five per cent in SA.”

The 5MW battery energy storage solution is primarily being installed to improve generation stabilisation, and is timed to coincide with the shift from the ageing Ron Goodin Power Station to the upgraded Owen Springs Power Station.

“This Energy Storage system, along with our new machinery at Owen Springs, heralds a new era of power supply for Alice Springs,” Mr Duignan said.

“We’re replacing aged electricity generators with the latest equipment, to provide efficient and reliable power supply, drive down the cost of producing electricity and to support a transition to renewable energy.”

The Battery Energy Storage System will be used to provide improved power generation reliability for the region, by assisting by compensating the output of Territory Generation’s solar power during cloud cover events.

“There is significant expectation from industry, business and the community in Alice Springs to increase solar penetration on the grid, however without storage to smooth the solar output, there is limited opportunity to integrate further solar without impacting on grid stability,” Mr Duignan said.

“Reliability of base-load power is a major issue in Australia at the moment and these new technologies are an important step to ensuring reliability in a controlled transition to renewables.

“Ultimately it will assist in supporting the system to be able to increase the solar profile in Alice Springs.”

Territory Generation has undertaken extensive modelling of the Alice Springs grid with its new generators at Owen Springs Power Station, engaging consulting engineers Aurecon to provide the technical advisory services for the development of the project.