Engineers at the Australian National University have created a lens measuring just 6.3 nm thick, or one two-thousandth the thickness of a human hair.
News Image 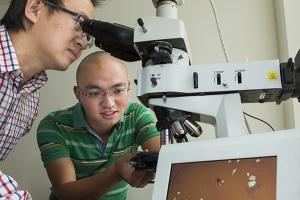 Engineers at the Australian National University have created the world's thinnest lens, measuring just 6.3 nm thick, or one two-thousandth the thickness of a human hair.

Previous ultra-thin flat lenses were made from 50 nm thick gold nano-bar arrays, known as a metamaterial. The key to this new, even thinner lens, is the molybdenum disulphide crystal, says leader researcher Dr Yuerui (Larry) Lu from the ANU Research School of Engineering.

According to Dr Lu, the material, and the ultra-thin lenses created using this discovery, would open the door to flexible computer displays, and herald a revolution in miniature camera technology.

"This type of material is the perfect candidate for future flexible displays," he explained. "We will also be able to use arrays of micro lenses to mimic the compound eyes of insects."

Molybdenum disulphide is in a class of materials known as chalcogenide glasses that have flexible electronic characteristics that have made them popular for high-technology components.

Molybdenum disulphide crystal has various valuable properties, being able to survive at high temperatures, act as a lubricant, being a good semiconductor material, and also being able to emit photons.

"The capability of manipulating the flow of light in atomic scale opens an exciting avenue towards unprecedented miniaturisation of optical components and the integration of advanced optical functionalities," Dr Lu said.

The researchers created their lens from a 6.3 nm thick crystal, which is the equivalent of nine atomic layers. They peeled the material from a larger piece of molybdenum disulphide using sticky tape — a move echoing the early production of graphene.

Once they had the "raw material", the scientists then created a 10-micron radius lens, using a focussed ion beam to shave off the layers atom by atom, until they had the dome shape of the lens.

The team discovered that single layers of molybdenum disulphide, which are 0.7 nanometres thick, displayed remarkable optical properties. To light beams, these single-atom-thick layers appeared to be 50 times thicker, at 38 nanometres.

This property, known as optical path length, determines the phase of the light and governs interference and diffraction of light as it propagates. That is, it is the basis by which lenses work to manipulate light beams.

To explain why this was happening, Assistant Professor Zongfu Yu at the University of Wisconsin, Madison, collaborated with the Australian team, and developed a simulation that showed that light was bouncing back and forth many times inside the crystal layers before passing through.