Photonics researchers may soon have another tool to work with the demonstration of a zero-index waveguide compatible with current silicon photonic technologies.
News Image 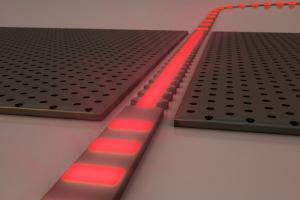 Photonics researchers may soon have another tool to work with the demonstration of a zero-index waveguide compatible with current silicon photonic technologies.

A team from the Harvard School of Engineering and Applied Sciences in Massachusetts, which previously developed the first on-chip metamaterial with a refractive index of zero, has pushed that technology further with the zero-index waveguide.

When a wavelength of light moves through a material, its crests and troughs get condensed or stretched, depending on the properties of the material. How much the crests of a light wave are condensed is expressed by the refractive index.

When the refractive index is reduced to zero the light no longer behaves as a moving wave, traveling through space in a series of crests and troughs, otherwise known as phases. Instead, the wave is stretched infinitely long, creating a constant phase.  The phase oscillates only as a variable of time, not space.

The researchers say this is exciting for integrated photonics because most optical devices use interactions between two or more waves, which need to propagate in sync as they move through the circuit. If the wavelength is infinitely long, matching the phase of the wavelengths of light isn’t an issue, since the optical fields are the same everywhere.

"That's an important step," said postdoctoral fellow Philip Camayd-Muñoz. "Because it means we can plug directly into conventional optical devices, and find real uses for zero-index phenomena. In the future, quantum computers may be based on networks of excited atoms that communicate via photons. The interaction range of the atoms is roughly equal to the wavelength of light. By making the wavelength large, we can enable long-range interactions to scale up quantum devices.”

To see the wavelength, Camayd-Muñoz and his colleague Orad Reshef combined two waves to create interference. They pinned the light down by shining beams in opposite directions through the device to create a standing wave. The individual waves were still oscillating quickly but they were oscillating at the same frequency in opposite directions, meaning at certain points they canceled each other out and other points they added together, creating an all light or all dark pattern. And, because of the zero-index material, the team was able to stretch the wavelength large enough to see.