We look forward to welcoming you to the upcoming second Horizons event for our centenary year. 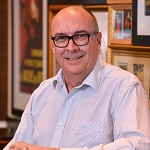 Phil joined Tianqi Lithium Australia, a subsidiary of global Chinese company Tianqi Lithium Corporation, as General Manager in August 2016.  He is responsible for the construction and operation of the world’s largest Lithium Hydroxide Processing Plant in Kwinana, which commenced construction in October 2016 and stage one is due for completion in 2019.  Tianqi is investing over $1 billion into Western Australia.

Phil is a Civil Engineer whose career commenced with Alcoa at their Kwinana alumina refinery.  He then moved to Shell where he had a 20 year career in Australia and around the world and was Downstream Director for Shell Australia for his last 3 years.  This was followed by a 5-year stint as CEO of Coogee Chemicals in Kwinana and then in his most recent role Phil was Managing Director of New Standard Energy Limited (NSE), a junior listed oil and gas explorer based in Perth.

For the last ten years, he has been actively involved as Chairman of a large not-for-profit organisation, Avivo, which has a staff of 1100 and turnover of $70 million pa.  He has served on the Boards of the Esperance Port Authority and the Disability Services Commission. In 2018 he joined the Board of Perth Symphony Orchestra as Chairman to help guide them through the next phase of development and growth.

Refreshments will be provided.