Pilbara Ports Authority (PPA) manages the world’s largest bulk export port in Port Hedland and facilitates the export of bulk commodities such as iron ore, as well as supporting the trade of agribusinesses and emerging global industries. The PPA is acknowledged as a global leader in port planning, operations and marine services.

In the past decade, annual throughput at the Port of Port Hedland has steadily risen, from 159 million tonnes to over half a billion tonnes each year. This has also seen an increase in the number of safe vessel movements from 2,400 each year to more than 6,000, including a higher proportion of Very Large Ore Carriers (VLOC) arriving at the Port.

New entrants, new berths and new service providers have added to the complexity of managing the port. The PPA has developed and implemented world-leading and innovative technologies to enhance efficiency and safety across its ports, as well as maximising export opportunities for port users. Most critically, growth at the port has been achieved largely as result of these technologies and operational enhancements without any major capital dredging in the shipping channel. Recent operational enhancements at the Port of Port Hedland include the below items which will be outlined within the presentation.

* Dynamic Under Keel Clearance (DUKC) System
The DUKC system is a consistent and scientific approach to shipping under keel clearance management. It was commissioned in 1995 and is the world’s most advanced web-based system, with the Series 5 providing a minimum of 90 cm clearance. The DUKC integrates real-time hydrographic and meteorological data, high density bathymetric data, real time AIS with advanced hydrodynamic and ship motion modelling directly into under keel clearance decision making.

* Tidal Model
An industry-leading tidal study project developed by Pilbara Ports Authority, when combined with maintenance dredging targeting high spots, has helped achieved an extra depth of 71 centimetres in the Port Hedland shipping channel.
The tidal study carried out in 2013, redefined existing depths along the 42km shipping channel in Port Hedland. The study resulted in the creation of a Lowest Astronomical Tide Model, or Hydroid resulting in an increased average sailing draft for Cape size vessels of 71cm and extended sailing windows in the tidally constrained port.
The resulting benefits for the port will now be used as a case study to support the development of a national Hydroid model for Australia called the AUSHYDROID, which is expected to contribute to Australia’s ‘blue economy’. This term refers to the effective and sustainable use of maritime resources for economic growth.

* Channel Risk Optimisation Project (CROP)
The Channel Risk and Optimisation project was completed in 2019 to alleviate the risk of disruption to exports from the port in the event of an adverse incident. The project will ensure other vessels sailing in a convoy can continue to safely navigate in and out of the port by enhancing one of the existing water refuge zones, located at a critical location along the channel where disabled draft restricted vessels can be guided into and anchor and providing an ability for vessels to pass a stricken vessel in the channel. Targeted removal of high spots in the channel, resulting in an ability to fully realise the existing channel depth, will also allow port users to further optimise tonnages on their vessels.

* Looking to the Future
In addition to managing the operating Ports of Ashburton and Dampier, several greenfield ports and Shipping and Pilotage Act ports along the Pilbara coast will come under the PPA management in coming years. This could see PPA managing up to 13 ports extending over 400km of coastline and 60km offshore. This not only helps to grow and diversify the Western Australian economy, it creates sustainable development and jobs in the region. 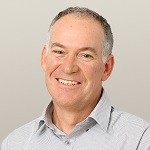 Mr Banks joined the Pilbara Ports Authority in 2013 and is responsible for port development, industrial lands and commercial trade across all port sites. He has extensive national and international experience in port planning and development in the private and public sectors and managed port expansion projects in Fremantle, Dampier and Port Hedland before joining the Pilbara Ports Authority. He has held management roles in planning, development and environment at Fremantle Ports and has represented ports on government and industry committees including the Chamber of Commerce and Industry Construction Forum, Kwinana Industries Council, Western Trade Coast and the Centre for Excellence and Innovation in Infrastructure Delivery.
Mr Banks was appointed Chair of Port Hedland Industries Council (PHIC) in 2019. Mr Banks holds a Master of Laws and Bachelor of Engineering from the University of Melbourne, a Diploma in Business (Port and Terminal Management) from the Australian Maritime College, and is a Graduate of the Australian Institute of Company Directors.