The Future of Public Transport Ridership

Start time: 12.00pm AEST. This seminar is an opportunity to hear from Professor Currie at a time of unprecedented uncertainty about the daily transport task and forecasting what might happen next with Public Transport ridership, currently hit particularly hard due to concerns about public interactions.

After a hiatus awarding the medal for a number of years the Transport Australia society has worked with the Civil College to award the 2020 Transport Medal to Professor Graham Currie for his work in public transport research, education and industry. This seminar is an opportunity to hear from Professor Currie at a time of unprecedented uncertainty since World War 2 about the daily transport task and forecasting what might happen next with Public Transport ridership, currently hit particularly hard due to concerns about public interactions.

With COVID-19 responsible for the largest global decline in ridership on urban public transport that has ever occurred, shutdowns, social distancing and economic recession have created cities where urban mass transit systems are empty generating significant financial stress for public transport in all cities. The two most important questions in urban transport today are: when will it end? And will ridership return?

This presentation outlines findings of a major research program addressing the second question: what will happen to travel after COVID-19? The paper outlines travel impact evidence from previous major disruptions and the results of a series of interviews with residents exploring future travel needs. The main focus of the presentation is an online panel survey exploring self reported travel impacts of the pandemic and how working from home, online deliveries, infection fear and other factors have acted to change users travel behaviour into the future. 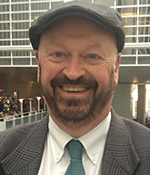 Graham directs the Monash University, Public Transport Research Group which in 2015 was identified in the top three research groups in the world in this area. Graham is Chair of the Light Rail Transit Committee at US Transportation Research Board and a member of the Research Advisory Board for Singapore LTA and the Swedish Centre for Research on Public Transport. He has won numerous research prizes including best paper; 14th World Conference on Transport Research and the William W Millar prize at the TRB conference (twice).  Graham is an elected fellow of the Academy of Technology Science and Engineering.

A renowned international Public Transport research leader and policy advisor, Graham has over 30 years' experience. He is founder of the ‘World Transit Research’ clearinghouse, which has consolidated all research in this field into a single accessible source and is now used by over 8,000 towns and cities in over 170 countries worldwide.

Graham has worked for some of the worlds leading Public Transport Operators including London Transport, and he has managed numerous Public Transport research and development projects internationally. Graham is also a specialist advisor to international agencies on planning transport for special events and has worked on all the summer Olympic Games since 1996 and the Hajj pilgrimage in Mekka.