One hundred years ago Engineers Australia came into being.

It was a joining together of 12 small colonial institutes, inspired by Australia’s federation as a nation.

The predecessor groups were scattered across the continent, had limited scope, and lacked a strong voice.

By joining – they hoped to raise the standing of the profession and create an institution able to, and I quote, “command the respect of engineers, public bodies and the general public, both at home and abroad, to speak with authority on questions of engineering, to raise, maintain and, if necessary, defend the professional status of engineers both collectively and individually”.

Some of the themes raised by the first President of the Institution of Engineers, Australia, William Henry Warren, in his first address are still important today. He: suggested a Code of Ethics for members; set out ideas on the education and training of engineers; urged engineers to pay their debts to the profession; and suggested (wait for it) the registration of engineers, a topic which is very much live here in New South Wales right now!

In 1935, the Institution decided to seek a Royal Charter from King George VI. The request, which was granted, shows the organisation’s attachment to the British Empire.

Other milestones that benefitted the Australian community and the engineering profession are numerous.

We have raised the standards of the profession by:

We have evolved with the engineering profession by establishing many different colleges and technical societies, and leading the way on diversity and inclusion.

We have become a voice for the profession, in the media, in industry and in government and in the community, where we work to encourage the engineers of tomorrow.

Australian engineering has a proud heritage, which we have celebrated in a range of ways this year. These include our Centenary book, Wonders Never Cease, which will be presented to our new Engineering Executives tonight and can be purchased on our website. The book features 100 Australian engineering achievements, including the stump jump plough, the black box flight recorder, the Snowy Mountains Scheme, the bionic ear and many more.

It’s an honour for me to join Engineers Australia as CEO at this juncture in history – to lead a peak body with a century of history at the dawn of the 4th industrial revolution.

The engineering profession is changing, and we will need to change with it. However, our core purpose will remain the same – to advance the science and practice of engineering for the benefit of the community.

In closing, I’d like to express my sincere hope that, 100 years from now, a generation of engineers who haven’t yet been born will be celebrating Engineers Australia’s 200th birthday! 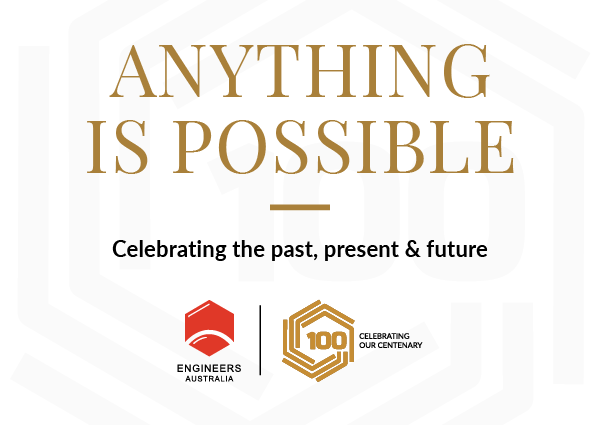