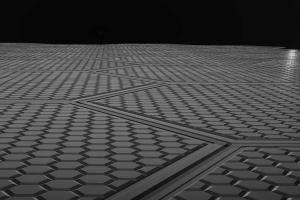 Solar panels on roads are now reality, as Missouri's Department of Transportation has announced it will trial Solar Roadway's solar road tiles in a sidewalk at the Historic Route 66 Welcome Centre. While this is a minor trial, the goal of the project is to see if the technology is viable and safe for use on regular streets.

Solar Roadways is a startup whose hexagonal modular paving tiles combine specially engineered solar cells, alongside LED lights that are able to create lines and signage without difficulty. Heating elements integrated into the tiles prevent snow and ice accumulation.

The hexagonal shape offers extra stability against wear, and also flexibility when installing at curves, hills, and other odd-shaped areas.

The panels each contain a microprocessor, and are able to communicate with each other, a central control station, and vehicles.

A specially formulated tempered glass allows the tiles to be safely walked and driven upon, with the toughness to support the weight of semi-trucks up to 113,398 kg. When laid on the ground, the panels have a tractioned surface similar to asphalt, but are imperious to potholes. The roughness of the surface is able to stop a vehicle travelling at 129 km/h in the required distance, even in wet conditions.

According to Solar Roadways, by integrating LEDs into the panels, it is possible to avoid painting over the panels, while allowing flexible and customisable road and parking lot lines and signage. The brightness of the lines can also be turned up during dark, foggy or stormy conditions.

In tests by the start-up, they found that panels that were covered in dust, for example, during summer drought conditions, produced 9 percent less power compared to clean panels. Additionally, contaminants like skid marks did not stick well to the glass. To deal with oil and transmission fluid spills, it is possible to sprinkle titanium dioxide on the surface, which turns oil and grease into a powder that can be blown off by wind or washed away by rain.

The Solar Roadways team hopes the use of their panels would create a highway system that would pay for itself over time by generating renewable energy. The electricity from the roads could also be used to power nearby houses and buildings, helping eliminate power lines. The smart technology within the panels could also work with the next generation of smart cars.

Don't forget to register for the Australian Engineering Conference 2016 in Brisbane on November 23-25.